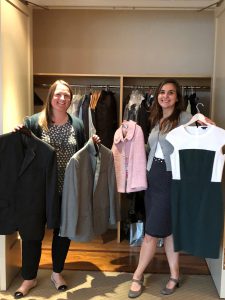 Walsh Pizzi O’Reilly Falanga LLP celebrated its second anniversary during the month of May by holding a clothing drive.

Christine I. Gannon, the attorney coordinating the project, explained:  “Since the traditional second-anniversary gift is cotton, the firm collected business wear to benefit Dress for Success® and Career Gear®, two extraordinary charitable organizations that Walsh is proud to support”

Dress for Success® empowers women to achieve economic independence by providing a network of support, professional attire and the development tools to help women thrive in work and in life.  Career Gear® provides professional clothing, mentoring and life-skills to help men in poverty become stronger contributors to their families and communities.

Along with a monetary donation provided by the firm, Gemma Pineiro, Nicole Travostino (pictured with some of the donations), and Ms. Gannon were responsible for collecting and categorizing the donations as well as ensuring their delivery to both charitable organizations.

On behalf of the firm, we thank everyone that donated for helping Walsh have such a successful celebration of its second anniversary!