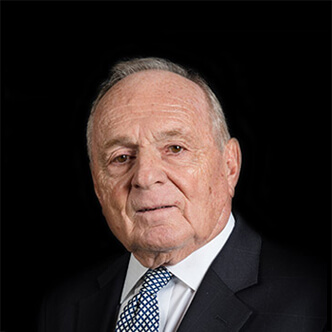 Richard J. Badolato has more than five decades of civil litigation experience on the trial and appellate levels in both State and Federal Courts. He focuses his practice on Insurance and Financial Services related matters. Prior to joining the firm in 2018, he was the Commissioner of the Department of Banking and Insurance for the State of New Jersey.

Throughout his career, Rich has represented many national and local insurance companies (life, health, and property), self-insureds, manufacturers and distributors of various products, oil companies, and professional services providers including doctors, dentists, lawyers, architects, engineers and accountants in defense of malpractice litigation. He has tried more than 320 civil matters to conclusion and argued more than cases on the appellate level.

His legal career has been marked by service not only to his clients but also to the legal profession and the executive and judicial branches of New Jersey state government. Rich is the former president of both the New Jersey State Bar Association and the Essex County Bar Association; he is the former president of the New Jersey State Bar Foundation.  He has served as Vice Chairman for the Supreme Court Advisory Committee on Professional Ethics; he was a member of the Supreme Court’s E-Filing Committee and was a member of the Supreme Court’s Advisory Committee for Mandatory CLE. Additionally, he served as Chairman of the Supreme Court of New Jersey Commission on Professionalism in the Law.  Rich has also been deeply involved in the American Bar Association (ABA) as the past State Chair of the Fellows of the American Bar Foundation and was elected to the ABA National Council of Bar Presidents Executive Committee and was also a Delegate to ABA House of Delegates.

During Rich’s tenure as Commissioner, the Department’s Banking Division received reaccreditation from the Conference of State Bank Supervisors and the Insurance Division received reaccreditation by the National Association of Insurance Commissioners. Under his leadership, the department increased insurance fraud enforcement, spotlighted financial literacy for high school and college students as well as seniors and improved insurance consumer services such as the establishment of the lost life insurance or annuity policy locator tool.